The Mohawk is, without a question, one of the coolest hairstyles in history. It originated from a Native-American tribe, was picked up by airplane fighting pilots during World War II, and then by rebel punks in the 70s and 80s. The Mohawk has had a troubled and fascinating history and now it has met dreadlocks. Which can only mean one thing – Mohawk dreads styles are by far the most awesome haircut you will ever have!

I’ve divided this piece on Mohawk dreads styles into two categories – for men and women. However, you should know that most of them are interchangeable and, most often than not, ideas can be swapped. So let’s get started!

I’ll open this list with a bang to give you a taste of just how cool this hairstyle really is. This is called a long Mohawk with dreads and exposed sides. As you can see, the beautiful locs are centered and have been pulled back to create a long ponytail. This, in turn revealed the shaved sides with intricate tattoos. (1) 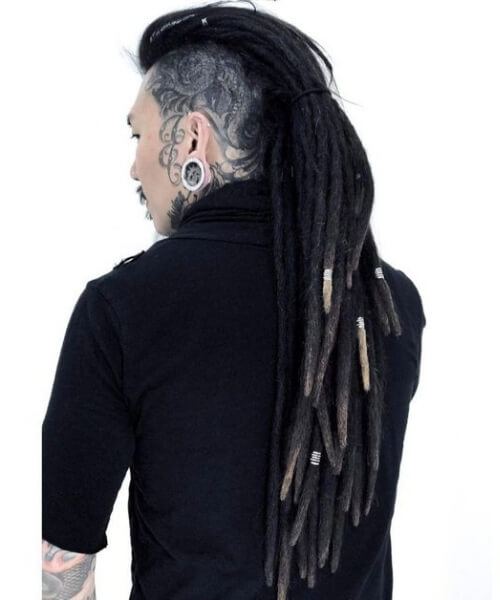 Turquoise is, without a doubt, the perfect color for summer. This is a peacock turquoise faux Mohawk with long bangs and a skin fade that is super in trend right now. (2) When it comes to Mohawk dreads styles, this is the closer you can get to the traditional punk hawk. It has a massive exposed side that can open up to your tattoos. It also has medium-sized green dreads that stick up on end just like punks used to have. (3) 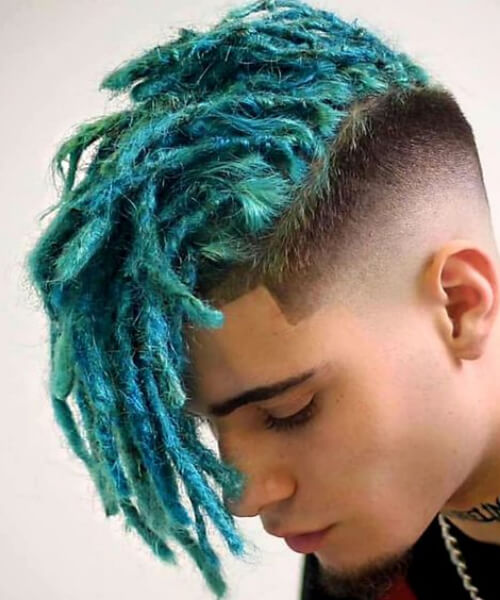 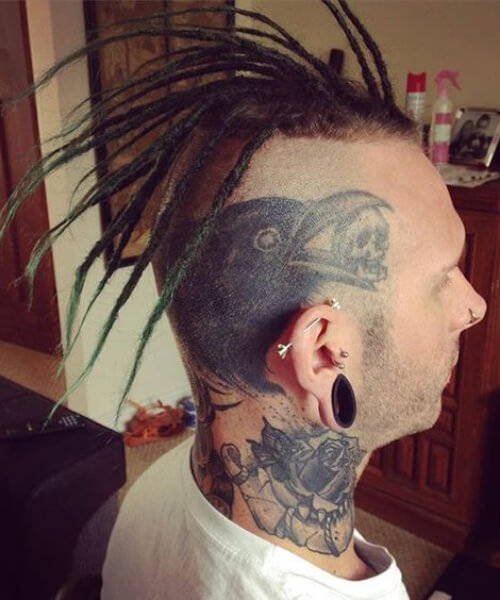 This has been one of the most popular haircuts in 2018 and it will continue to be so in 2019 as well. It’s a high top haircut with a fade and a faux Mohawk made of short dreadlocks. In other words, this hairstyle is a cornucopia of the best trends when it comes to men’s hairstyles. (4) 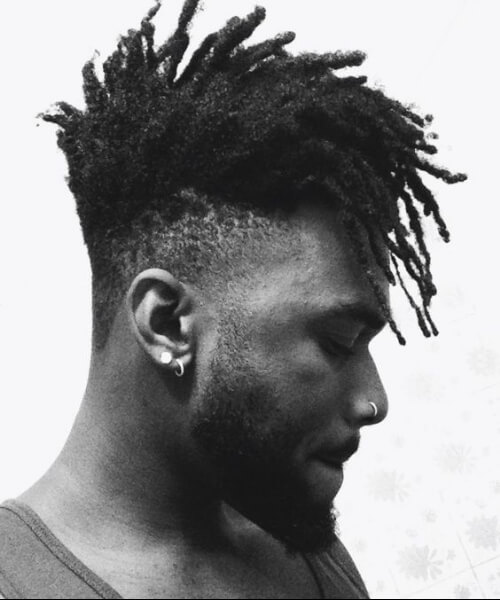 I could not have possibly ended the Mohawk dreads styles list for men without mentioning the one which started it all. Although it has not been definitively proven, it is believed that Vikings used to braid their hair in a fashion similar to locs and adorn it with small jewelry. They also shaved the sides to expose their tattoos which marked their victories in battles. (5) 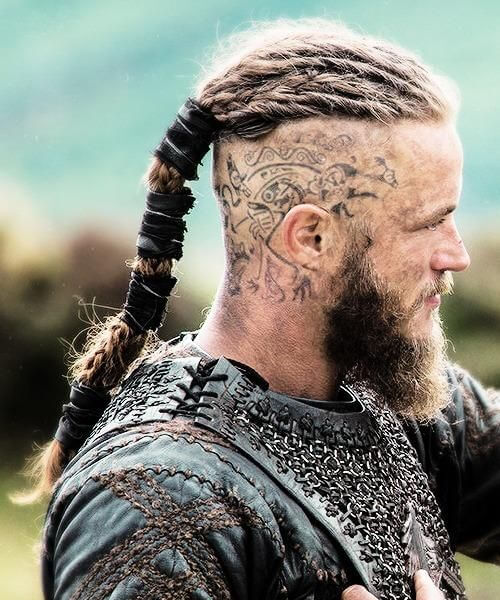 It takes an edgy girl to wear a Mohawk and an even edgier one to sport a Mohawk made of dreads. But when you do, you can be sure you’ll be the coolest girl around. Dread Mohawks have an element of badassery to them that is hard to match. Pair them with the right clothes, makeup, and accessories, and you can turn heads!

There are not a lot of girls out there brave enough to shave their heads, but the ones who do are rare like a pearl. This is a braided Mohawk with long, platinum dreads. The sides have been completely exposed even though the model hasn’t got any considerable tattoos. Still, in this way, your eye goes immediately to her hairstyle, which is what you want to begin with! (6) 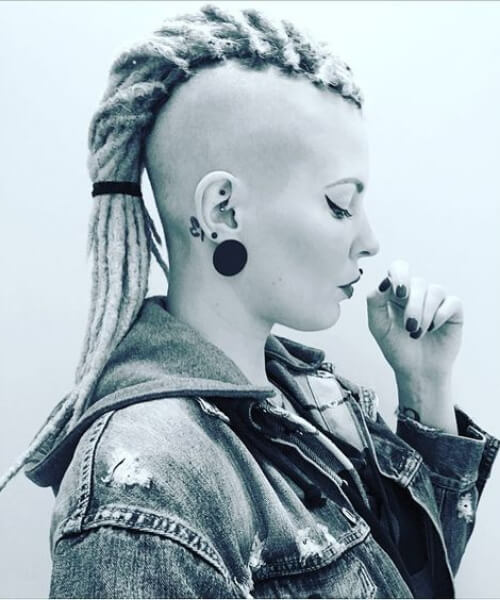 This black and white dread Mohawk is a work of art. The Mohawk itself has two layers. The vanilla blonde dreads sit on top and cascade down her back in a luxurious fishtail braid that has also been laced with a few colorful strands of yarn. Underneath, you can see the model’s natural dark hair teased up to sustain the Mohawk. On the sides there’s a wonderful hair design signifying a stylized lotus flower that mirrors the rose tattoo on her neck. Talk about Mohawk dreads styles! (7) 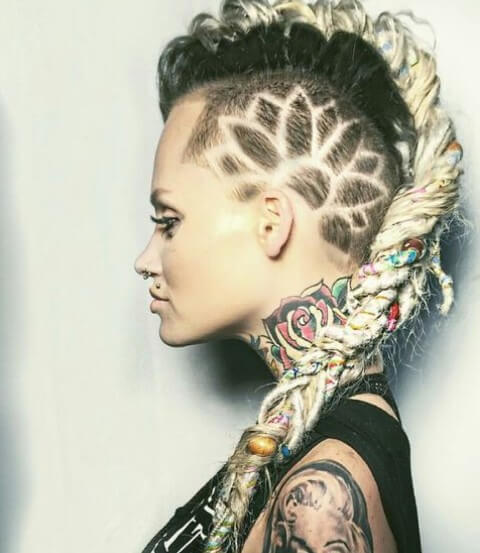 Here’s another braided Mohawk but this one is very different from the one above. It’s still a fishtail braid, but it’s a lot tamer and more classic. In fact, if you decorate this hairstyle with a few flowers such as the traditional baby breath, small white roses or jasmine, you can wear this one to your wedding. (8) 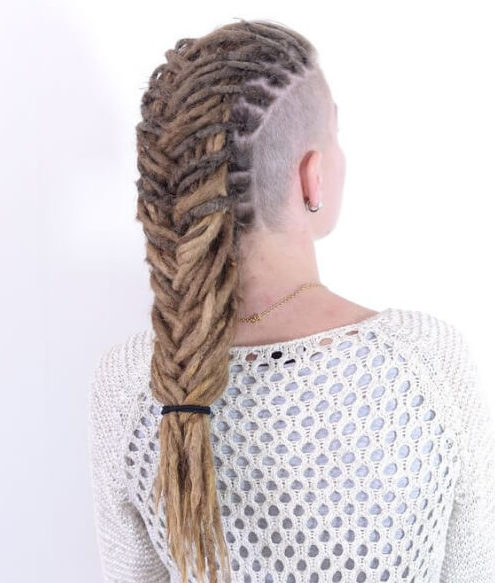 Last but definitely not least, here’s a dread Mohawk made entirely out of goddess locs. They are superb and incredibly popular, not just because of their appearance, but also because they are a protective hairstyle. I’m also a huge fan of the combination between Mohawk dreads styles and hair designs! (9)

Dreads are a way of life, we all know that. On the other hand, Mohawks have always been used to send of message that the wearer is a rebel and a free spirit, ready to fight against tradition and any rules imposed by society. Put these two together and what do you get? The coolest Mohawk dreads styles you’ve ever seen!

Previous Post: « 7 Things Not to Do With Your Dreadlocks
Next Post: Wax vs. Gel for Dreadlocks – What Should You Use? »

BE IN THE KNOW - Sign up and be one of the first to know of discounts, updates and more.

We offer some affiliate items on our website, and earn a small commission on sales. Rest assured, this costs you nothing extra, and actually allows us to serve you better. This includes the Amazon Services LLC Associates Program.